The Employees’ Provident Fund Organisation (EPFO) is expected to soon give its go-ahead to the proposal of doubling monthly pension for EPS subscribers to Rs 2,000.

This would benefit at least 40 lakh subscribers and cost the Centre a minimum Rs 3,000 crore per annum.

The issue, though not listed on the agenda for the upcoming central board of trustees’ meeting of EPFO on June 26, is likely to be tabled after permission from the labour minister, who is the chairman of the board.

The Union Cabinet had in 2014 approved a minimum pension of Rs 1,000 a month for a year and later extended it till perpetuity in 2015. The differential cost of Rs 813 crore per annum to pay the minimum pension is borne by the Centre and going forward this could more than double if the pension amount is increased two fold for all subscribers currently getting less than Rs 2,000 a month.

Another issue that can come up for consideration of the board includes giving EPFO subscribers the option to increase their investments in equity beyond 15%. This would, however, require the finance ministry to notify the new investment pattern for EPFO. 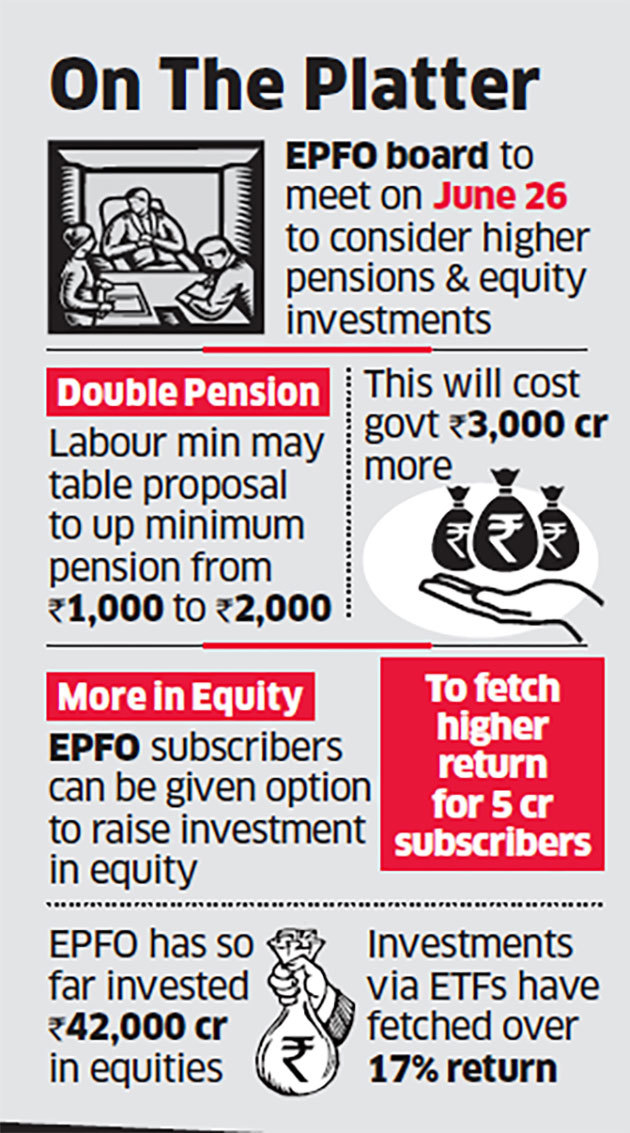 The central board of trustees of EPFO is the highest decision making body. It comprises representatives of trade unions, employers as well as central and state governments and all decisions related to the retirement fund body are taken by the CBT.

There are around 60 lakh pensioners under the EPF-95, of which around 40 lakh are getting less than Rs 1,500 per month. Of these, 18 lakh are the existing beneficiaries under the minimum pension of Rs 1,000. The government has about Rs 3 lakh crore of pension funds and disbursement worth Rs 9,000 crore is made annually under the EPS.

A parliamentary panel had recently asked the government to assess Employees’ Pension Scheme 1995 and consider revision of minimum monthly pension of Rs 1,000.

In its 34th report tabled in parliament on Wednesday, the Parliamentary Standing Committee on Labour said it is of the firm opinion that this (Rs 1,000) is too meagre an amount, which will not be able to fulfil even the basic monthly needs and requirements of a pensioner.

The committee recommended that government undertake an assessment of the pension scheme with particular reference to the right of sustenance of the pensioners and based on the result consider revision of the amount accordingly.

Employees are automatically enrolled into the EPS scheme only if they are members of the EPF scheme. The 12% of the employees’ salary every month goes to the EPF account while the 12% of the employers’ contribution is divided into 3.67% for EPF, 8.33% for EPS and 0.5% for EDLI.